IT’S ALL WELL AND GOOD being a diver coxswain on a RIB, but when all your divers are in the water it can sometimes get a little boring topside. One way to whisk away the minutes is to listen to music. But consumer electronics and saltwater don’t mix, and iPods aren’t in the slightest bit waterproof. No, the only real solution is to install a purposely designed marine unit, and we’ve been testing one of the latest models on the market to see how it performs. First impressions of the MRD80i were encouraging. With its chunky rubber protected buttons and dials (similar to those on a marine VHF radio set), it had the look and feel of a unit capable of withstanding a thorough soaking. This was confirmed by its IP (ingress protection) rating of 66. The first ‘6’ denotes that it is totally dustproof and the second ‘6’ that it can withstanding a good blasting of water from a hose pipe. Installing the unit and a pair of suitable waterproof loudspeakers took two of us around a couple hours, as we went for the flush-mounting option. The surface-mounted gimballed bracket method of installation would have been quicker, but nowhere near as waterproof. Having bought an inexpensive bendy aerial from a high-street car parts shop, the first function I tried was the radio. This worked well and, given that this is a compact unit, had an incredibly high sound quality. I then tried the unit’s other music source input capabilities using a variety of MP3 players, including an iPod, and they all functioned flawlessly. All players are housed inside the unit’s ‘media dock’ using a hinged waterproof door and plug in via Apple’s iPod connector or a jack plug. If you use an iPod you get full functionality using the units outer keypad, whereas a standard MP3 player will simply play tunes in the order you have pre-selected. However, by far the most economical route to choose is by using a SD card. You simply drag and drop your tunes from your Mac or PC onto a memory card using a card reader, insert the card into the player and away you go. As well as playing the tunes themselves, the details of the artist and album are also displayed on the backlit 32-character LCD screen. The MRD80i is not short on power output either, delivering 45 watts to a maximum of four loudspeakers, which is more than loud enough for the average-sized RIB, even at cruising speed. My only niggles are that the radio’s electronics are from the USA and therefore don’t display the station’s details only the frequency, and that it’s an analogue set – a digital option would have been nice. The unit has now been on the RIB for more than four months and has had quite a large exposure to saltwater spray. It’s been in use almost daily over the summer diving season and has worked flawlessly. At £300 it’s pretty good value for money and for the safety conscious you can now receive the shipping forecast while out on your RIB. Charles Hood » 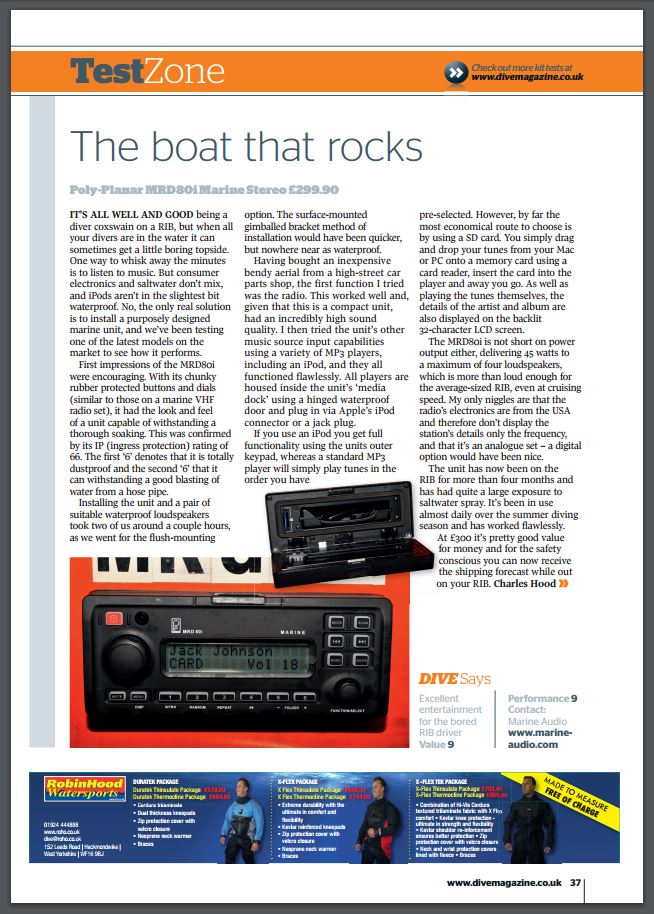